The following firsthand account comes from one of our trusted contributors who wishes to remain anonymous for their safety. It has been lightly edited for typos and inclusion of sources when applicable.

"Last night, at the federal courthouse in Eugene, a large protest took place. When I arrived there appeared to be several hundred people chanting, clapping, and cheering.
There were also about 50ish counter protesters. Many of them had shields painted red, white, and blue with slogans like "all lives matter", and "back the blue."

Side note: I find it funny that they had shields. BLM Protesters often bring shields to deflect rubber bullets and other impact munitions from the police. These people are usually given fist bumps and sometimes a knowing wink and a nod from local police, as I've seen several times at previous protests. These folks will commit assault, sometimes with a weapon, and police will literally turn their backs in order to have deniability.

As things got heated, my team had finished our sweep of the perimeter and wanted to be nearby the action in case there was a fight and someone needed medical. When we were about 30 feet away, a pistol shot rang out, and several dozen people ran in the opposite direction. Myself and my team honestly thought it was a firework. I'm very familiar with the sound of gunshots, but I hadn't realized how different a gunshot will sound in a crowd of people, as opposed to at a shooting range or in the woods.

The man who fired his gun took off running. Supposedly he was caught by some protesters and roughed up. But I can't confirm that. The shell casing on the ground confirms that there were shots fired."

Screenshots referring to that incident: 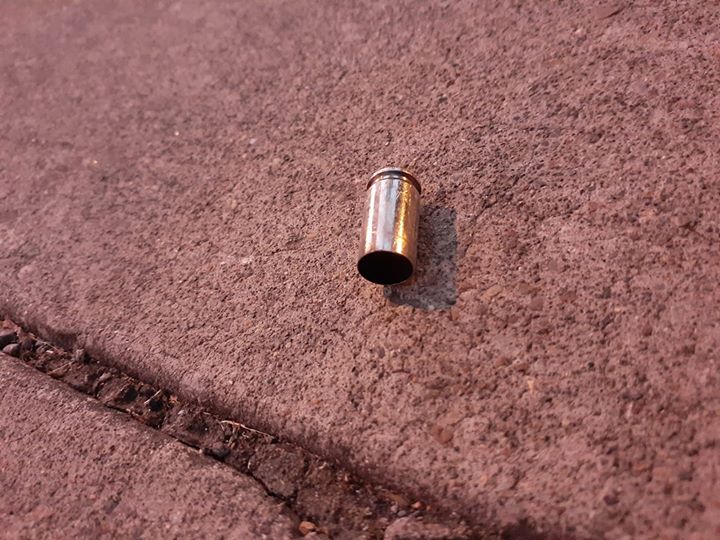 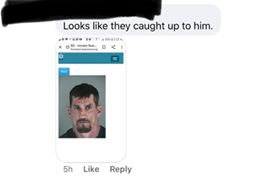 Let me just speak to how surreal this situation is for a moment. There were shouts and screams in the distance, it was hard to see further than a block due to gas and smoke. This was 6 blocks away from where I used to work. Three blocks from where i saw my first concert. As a car sped down the road towards me, I darted into a familiar alley. I often took this alley as a shortcut home after a night on the town. I would take this shortcut as it was peaceful and separate from the noise of a bustling and thriving downtown. And now it's a war zone choked with chemical weapons in the midst of a pandemic.
The gas was getting to me--choking my throat, burning my lungs and nose, starting to make me panic. This panic would normally be abated with a deep breath and concentration, but that wasn't an option anymore. I emerged from the alley and found my team.

I overheard folks with press badges insisting that tear gas hadn't been used. They also said they weren't in the crowd when munitions were deployed. The fact that my arms and face still burn while typing this beg to differ with their assertion.

We walked with the small sputtering remains of the protest back to the courthouse, when we spotted police and federal troops charging across the parking lot of Whole Foods toward our group. We decided it was time to go.
We sprinted down a street perpendicular to their approach to break their line of sight, but there were riot officers charging down the next block over as well. We prepared to make a mad dash towards downtown, but as we crossed the street, a member of my team screeched to a halt in front of us in their car and yelled for us to get in.
We hopped in and took off just as the light turned green, and we were safe.

Seven were arrested, maybe a dozen injured. I hate to think of the fate that those without such a reliable team faced after we made our escape.

In closing, I'd like to point out the disparity in treatment between protesters and counter protesters, as well as the kinds of crimes both parties committed.
Protesters moved construction equipment to create roadblocks to keep from being victims of vehicular homicide, spray painted walls, and broke windows.
Counter protesters sprayed people with poison, tried to commit murder with a vehicle, and discharged a firearm into a crowd on federal property."

The following video from another source shows disparity in police targeting. In the first few seconds of the livestream clip, the man in the red shirt with the vest appears to punch the kid on the bike in the head. Moments later, the blonde teenager in the white shirt is arrested with excessive force.

In another example of who is targeted, a man is arrested for crossing the street. His charge is "resisting arrest." Do keep in mind the many eye witness accounts detailing direct violence against protesters by counter-protesters and the arrest ration of the two groups for this particular night being 6:1.

In an attempt to close this post on a somewhat positive note, protesters continue to look out for one another and express community solidarity. 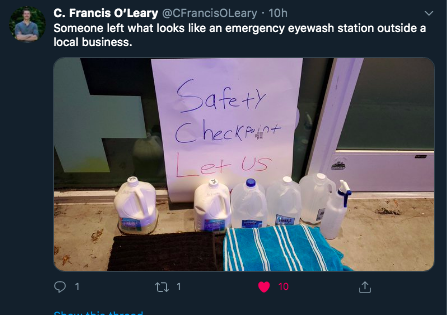