This week in Portland, fascism tests the waters 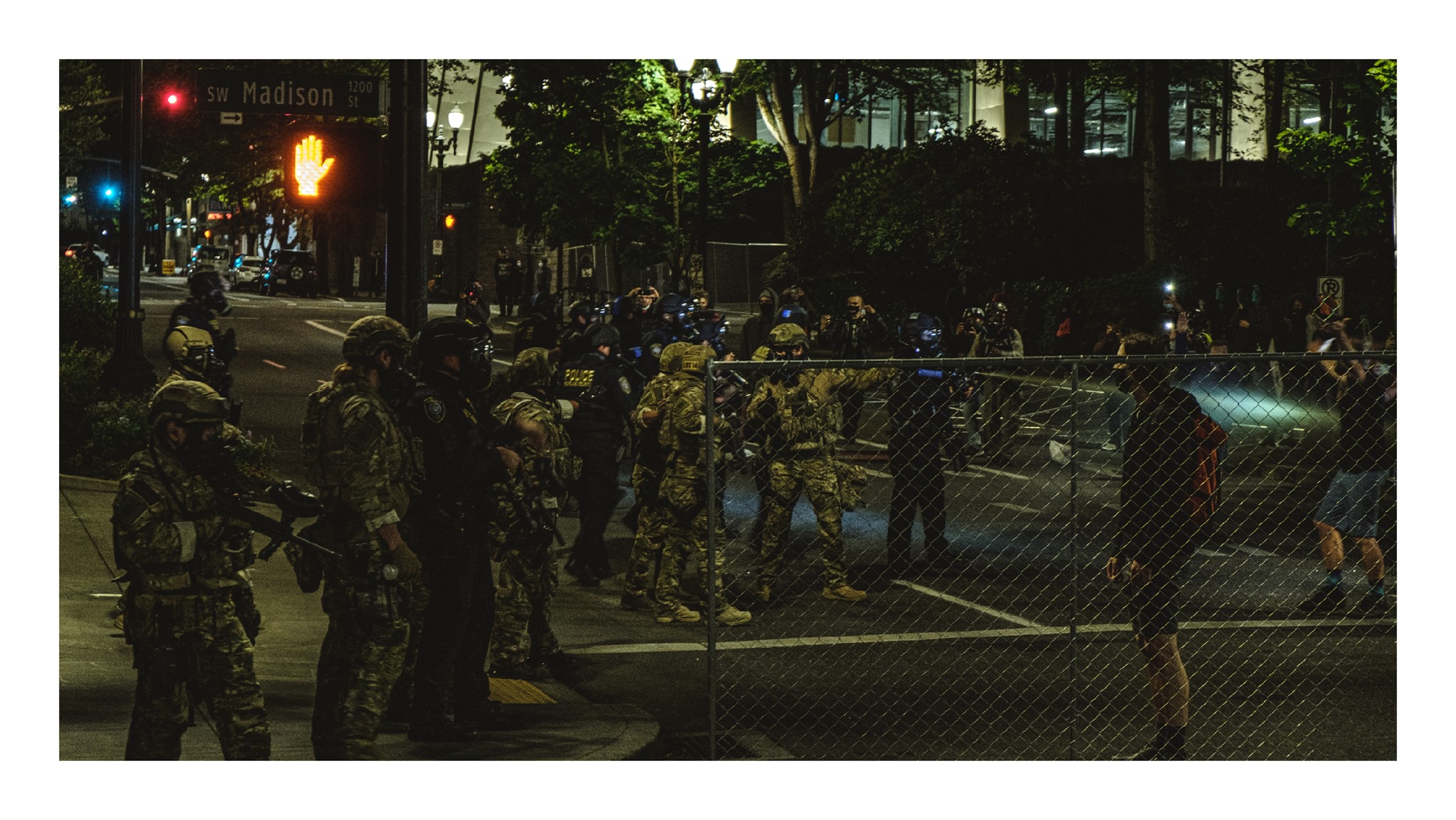 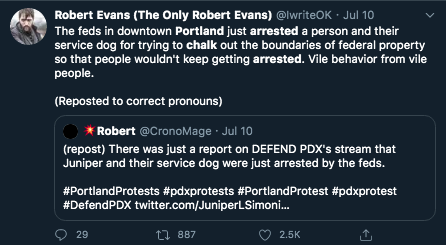 "The feds in downtown Portland just arrested a person and their service dog for trying to chalk out the boundaries of federal property so that people wouldn't keep getting arrested. Vile behavior from vile people." 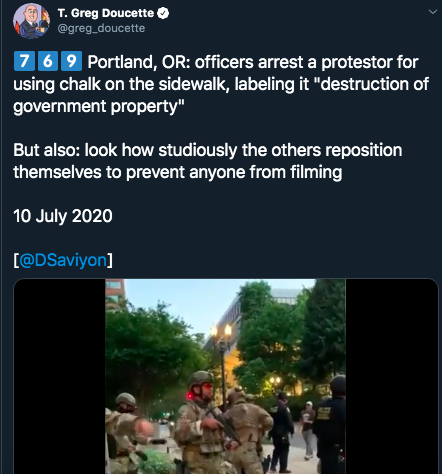 "Portland, OR: officers arrest a protestor for using chalk on the sidewalk, labeling it "destruction of government property" But also: look how studiously the others reposition themselves to prevent anyone from filming"
Video here:

Nightly protests have a guarantee of tear gas exposure and police brutality, but this night was one of the worst.

One protester is shot directly in the face. Video of other protesters moving to help them here:

Another protester is tackled and held down while actively seizing.

For those who are not aware what to do when someone is having a seizure, this is NOT it. Proper medical attention would be to lay the person on their side in recovery position if possible, making sure their airway stays clear, placing something soft like a sweatshirt or blanket under their head, and removing anything sharp or pokey like eyeglasses or anything on the ground nearby. You do not attempt to restrain them, just roll them on their side if you can do so without resistance from them. If not, you do not move them at all, to avoid injuring them further.

This officer is sitting on that person's chest, pinning them flat on their back. Not only could restraining a seizing person in such a way cause serious injuries, it could very much kill them. This is police brutality. This is not medical attention. They refused to let any medics nearby and pleading to help assist in any way.

Afterwards, feds decide to clear the area by shoving people clearly marked as medics down the street. Tear gas is deployed.
Video here:

That afternoon, this post was made on Facebook detailing an account of spotting a white power symbol at the federal courthouse, a place that has been off limits and inaccessible to all but cops, marshals, military, etc:

"Day 45! & this “white power” symbol is in one of the windows of the Court House next to the Justice Center! On the inside - how does this happen?

And it’s a white hand against the colors of black and red... the number 33 is one that the KKK uses to identify themselves. And usually it’s used in groups of 6.
Again, this is the Federal Courthouse! The one facing the Black Lives Matter Movement! The one the police are trying to convince the city we have no more need for ... when will BLM to those who are supposed to protect us?
Edited: adding a third photo when I got back even further you can tell there are 6 rows of 33! 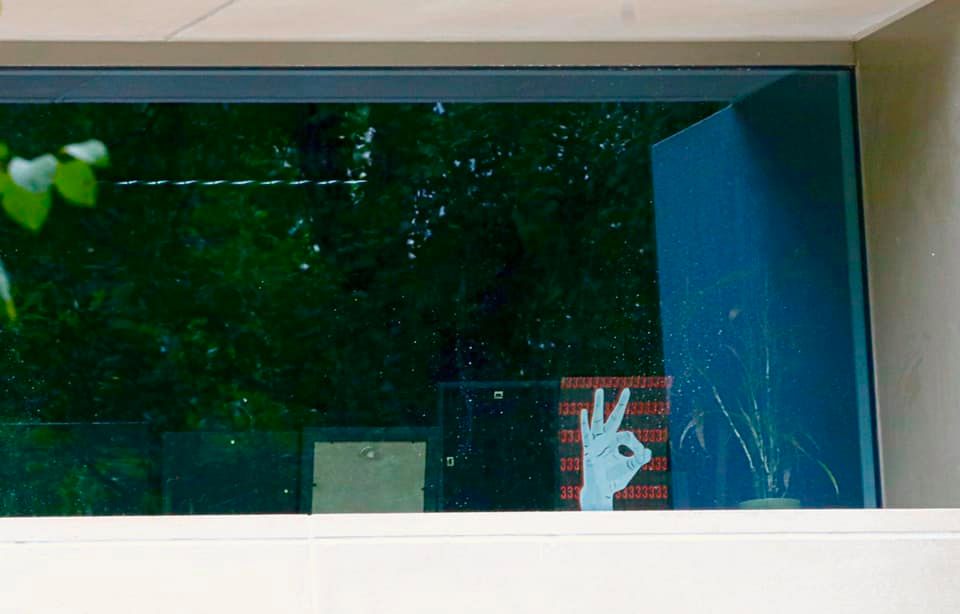 I need y'all to stay horrified at the fact that 3 different federal agencies are now policing portland.

-they (primarily US Marshals) are starting to use older munitions that are failing more frequently which means they're probably running low and will likely be escalating in violence and making more arrests/pressing charges in the coming days.

-they've already been using excessive force– just tonight, someone people think is a minor was beaten so badly they had to be taken away in an ambulance, more than one person has been hit in the head by munitions (horrible, bloody injuries caught on video), and since they're not under the restraining order against the city they're using tear gas and the LRAD (which is loud enough to burst ear drums and can actually kill you depending on the magnitude and range) frequently.

-I've been on car watching duty a couple nights this week and there are at least 5 vehicles that stalk the area with no license plates, the black van whose passenger threatened my friends and I last month is out nearby most nights, and it's not uncommon to see big trucks full of people watching and recording as they drive by. two nights ago, a car tried to run protesters over similarly to the driver who killed Summer Taylor in Seattle last weekend, was surrounded by people, and shot five live rounds into the air as they drove away. on a livestream tonight, a truck sporting a big US flag in the back *sped* through a *red light* right in front of a group of PPB officers who didn't even blink.

-independent journalists, the only ones still out recording police brutality every single night since the local news orgs stopped like a month ago, have been arrested and brutalized so much that they're starting to stay home to protect themselves and save what mental health they have left. they've started looking into buying bulletproof vests to do their jobs in. the local news orgs that do report on what's going on almost always report police brutality in the passive voice, or spin it completely to sound like protesters have deserved what's happened to them.

I can't think of anything else to add right now because my head is spinning and I'm still trying to watch livestreams so my night at home doesn't feel completely useless.

please, please, please don't look away. don't normalize this. please hear me and see us and please keep helping."

The following videos show the abductions of protesters by unidentified state agents. I cannot confirm they happened on this day, these particular videos were, however, posted on this day.

Source for above video

Source for above video

"UPDATES on abductions by Feds in Portland, OR. Folks snatched by Feds in unmarked vans seem to have a common experience. They're taken by un-ID'd men in fatigues, driven around blind and restrained for over an hour, coerced, photo'd, then released. Details+link in thread...
The stories we hear are similar enough to suggest that these abductions are part of a protocol. After being pressured to waive their rights they are photo'd & released, whereupon they realize they were inside the Justice Center. These detainments are not arrests. 2/7 ...
Imagine being taken off the street by *unknown* men with guns in an *unmarked* car and driven blind for 90 minutes before opening your eyes in a strange building with more armed men telling you to sign something. I posit to you that this is textbook terrorism...
Here is one such story , reported by OPB. “Feds are driving around, grabbing people off the streets,” O’Shea says in the video. “I didn’t do anything fucking wrong. I’m recording this. I had to let somebody know that this is what happens.” ...
In addition to this obviously unconstitutional, deliberate intimidation tactic, local police were livestreaming last night, zooming in on and screencapping protestors' faces, then pursuing those people later, away from the demonstration area. Breaking car windows, too...
Dont let this new wave of outrage give you amnesia: the Feds shot a person in the head just a few nights ago, shattering his face and nearly killing him. PPB closed and raided parks without giving notice & arrested and brutalized a dozen people, among them journalists....
These Feds are a coalition of nonlocal federal employees including the fucking BORDER PATROL -the dunces of the police caste. They're Trump's occupying force and they're here to hurt people. Please, America. Tell our story. Portland is just the first town against the wall." Source of tweets here. 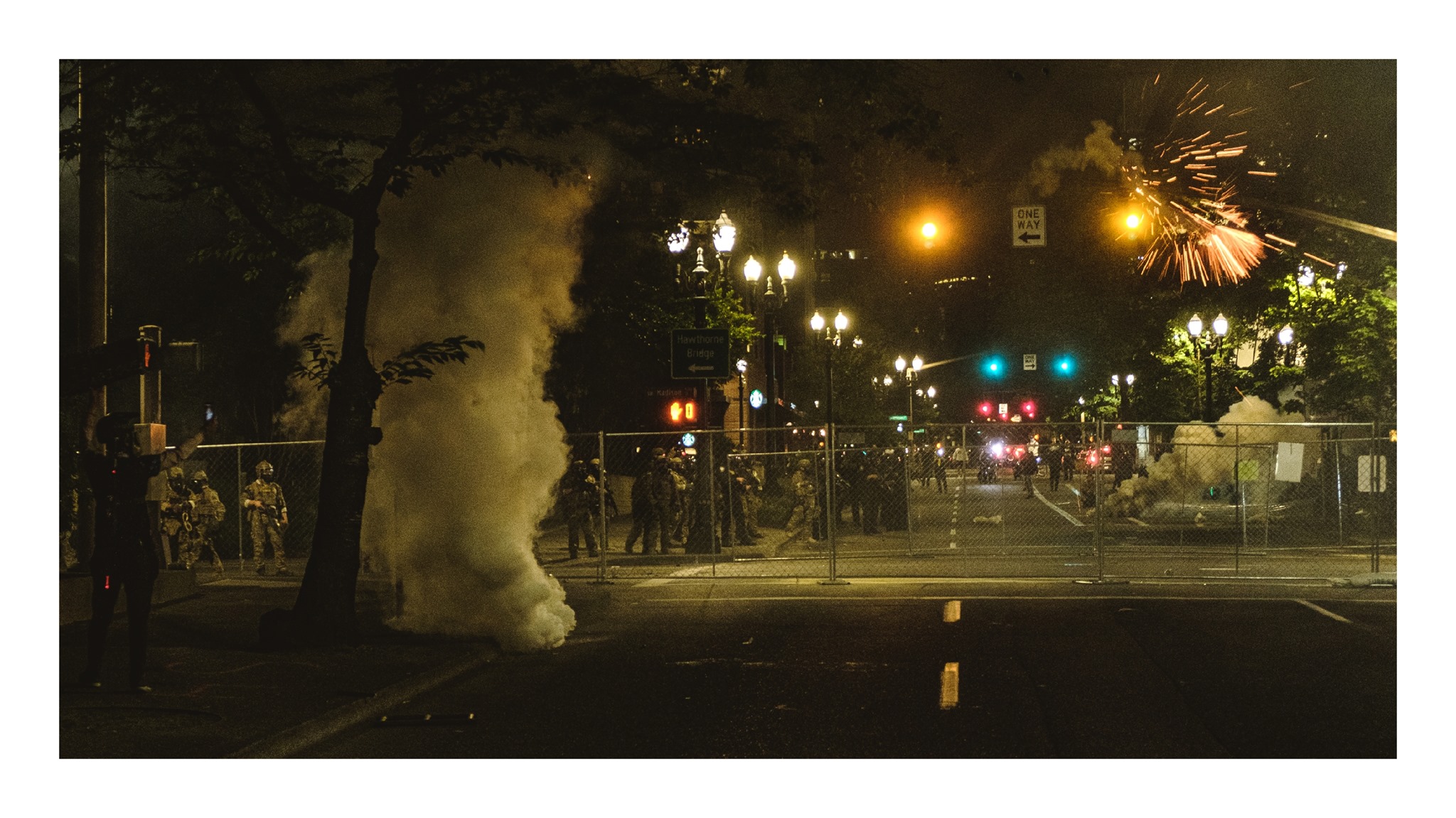 7-9:40 PM Upon arriving at the park, there's about 500 people here, gathering outside of the steps of the Justice Center, where Hip Hop Stands Up has set up a sound system & Jo Ann Hardesty holds a candelight vigil. There was a land acknowledgement, several speakers(made up of local leaders) and some backlash from a portion of the crowd. Jo Ann/the crowd kept the event together despite the in fighting and then the performances by local hip hop artists begin. There were fences completely surrounding Chapman and Lownsdale but by 930, most of the fencing has been knocked down and re appropriated as a barrier.
9:42 LRAD announces that the parks are closed and we need to evacuate the park or we are subject to arrest, citation, and use of force.
10:27 Roughly 35-45 federal agents and about 10-15 PPB confronted the crowd around the intersection of 4th and Madison. Crowd was chanting in opposition of their order to leave the park, so the federal officers started macing people at point blank range and firing off at least 10 tear gas canisters. The entire park was filled in thick clouds of tear gas smoke (the smoke felt more vicious than previous nights) and they pushed the crowd up Main and Madison. Targeted arrests made.
11:22 Half of the group that was pushed out marches to Ted Wheeler's condo in the Pearl district, only to take a vote upon arriving that they should go back to the Justice Center. Probably about 400 people in each group, roughly 700-800 total. Big numbers tonight.
11:58 Pepper balls and a tear gas canister is fired out of the federal courthouse "murder holes" because protestors started converging near the steps.
12:12 The response to the pepper balls and tear gas by the crowd was to block the entrance to the Federal Courthouse with fencing.
12:39 LRAD announces that we are subject to arrest and use of force, asking crowd not to block the doorways to the JC and Fed Courthouse.
1:32 The crowd had lit fireworks in the direction of the JC and blocked off one of the doorways. PPB has declared an unlawful assembly, telling the crowd they have 4 minutes to clear out all of the barricades. They also announced downtown is closed. They changed their verbiage tonight by saying that the crowd was "inhibiting local and county law enforcement."
1:46 Officers just stormed, firing tear gas, pepper balls, flash bangs, and arresting whomever they can grab.
1:53 Regrouping at Broadway and Taylor, there is no real time to slow down though as the officers continue to chase the crowd.
2:30 We have been chased all throughout downtown-- officers charging as soon as they're within a block of us. People are having asthma attacks from the gas and the running. Barely any time to regroup.
2:51 We got pushed to 15th and Taylor, police had retreated around 2:40, we start to march back down Taylor and they start to immediately push back and fire off more munitions after the crowd reaches 7th. I left at this point but on my way out saw a riot van, a few undercover vehicles, and a patrol car all riding around different parts of the park blocks, making sweeps and arresting smaller groups."

Video of that night here.

I'm going to end this post with a more gentle empowering moment from the protests, when a fully nude person confidently strode up to the line of feds. They proceeded to go through some yoga poses, and the feds withdrew from the scene entirely.

Later that night, in the early hours of Saturday morning, police and feds worked in tandem to clear people from the streets. This is a week after mayor Ted Wheeler had assured the city they would not be working together and had publicly called for feds to leave the city.

But anyway, here's another pic of the naked protester. 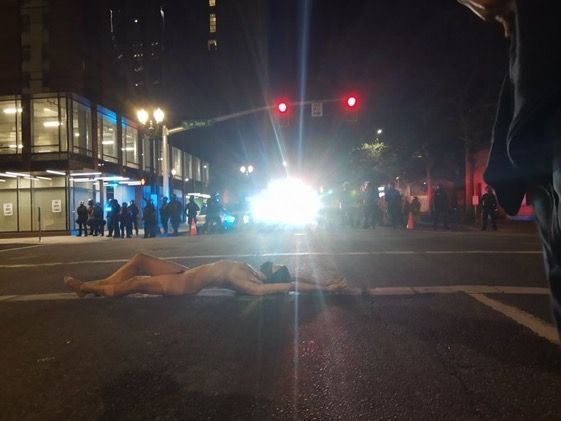